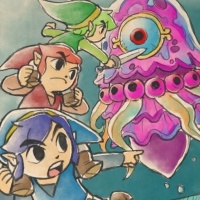 Build 1019 changes
------------------
- several bugs corrected thanks to Simon : I had broken the clock's cycles
global count, which affected a lot of parts in the emulator... Also, thanks
again for forcing me to fix a long-awaiting bug when switching back from the
environment screen...


Build 1014 changes
------------------
- it is now possible to manually insert .tap tapes with the menu interface (it was previously only possible to insert .wav tapes when in hardware tape mode).
- recording a program on a .tap now writes four synchronisation bytes ($16) instead of three. But the emulator is still able to read files with one, two or three synchronisation bytes.
- in .tap mode, a trap has been added on the "bit read" routine in rom, so that more programs that use a copy-protection routine can be used in .tap mode without having to resort to .wav tapes.

Build 1013 changes
------------------
- thanks to Dbug who spotted a bug when timers reach zero (a fraction of last instruction's cycles were not counted). This should now be fixed. There's also a simple fix of the duration of the initial countdown of VIA timers.


Build 1011 changes
------------------
- now emulates the PSG IO-port direction bit. This is not useful (it prevents the keyboard to work), but it removes a difference between the emulator and the real thing.
- also emulates the propagation of ground voltage through the keyboard matrix intersections when several keys are pressed simultaneously. Again it's not really useful (it will even make wrong key detection in some conditions), but at least it behaves like the real thing.
- Euphoric was so strongly emulating the crash of a 6502 executing a column 2 opcode, that it was stucked in a tight loop... Now the reset key allows to regain control...


Build 1010 changes
------------------
- added a specific option for the Pravetz (-p). Also, euphoric.ini has a specific Pravetz rom line:
"PravetzRom=...", and "Computer=Pravetz" can be used. Last but not least, windows shortcuts for Pravetz
with and without disk interface are provided.
- added emulation of Borislav Zahariev's Overlay Ram Access add-on. This add-on enables access to the 16 KB of ram, as does the Microdisc controller. Borislav (aka. Bobby) has also tied this interface to his Apple DiskII Interface, allowing Bobby RDOS 2.10 to be loaded in the overlay ram, thus freeing the 48 KB of the Pravetz 8D.
- updated the Configuratoric tool to select a rom for the pravetz and to use the Overlay Ram Access add-on. Also, two Pravetz shortcuts have been added to the Euphoric menu, and double-clicking .nib disks automatically starts a Pravetz with a DiskII interface. Thanks to Georges and the great Pravetz-8D fans for all the information on this computer, and the nice icons.


Build 1009 changes
------------------
- I had inadvertantly broken the pravetz disk interface soon after adding it. It is back again : add line "DiskController=Apple" to euphoric.ini, and don't forget to provide the disk interface eprom with line "AppleInterfaceEprom=eprom8d.rom", and also use pravetzt.rom or pravetzd.rom as the internal oric rom. If you use the pravetzt rom, it won't automatically boot the floppy, you will have to issue a CALL#320.
- also I only have partial information on the Apple interface hardware used by the Pravetz, so writing to disk didn't work. I have modified the value returned by a register, it seems it works now...

Build 1008 changes
------------------
- modified the 6502 emulator in order to be able to detect a timer countdown before an interrupt is raised. Thanks to Simon for having spotted a bug in M.A.R.C that exploits this "feature"... Also, quite heavily changed the 6502 emulator at the same time to simplify it, and found that some undocumented opcodes are bogged... (not fixed yet)